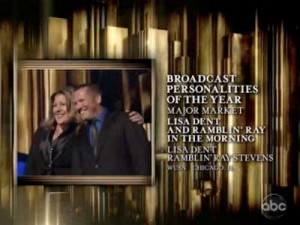 A belated congratulations to US99.5’s very own Lisa Dent and Ramblin’ Ray [Stevens] and the rest of the WUSN morning crew for their 44th Annual Country Music Association win for Broadcast Personalities of the Year in a Major Market. The duo accepted their award during a special pre-telecast ceremony emceed by artist Rodney Adkins. Former Chicagoan and host of the CMT Country Countdown USA host, Lon Helton, picked up his fifth CMA Award for National Broadcast Personality of Year. Congrats to all of the winners and nominees.  For a fill list of winners, visit cmaawards.com

All I want for Christmas is Jennifer Nettles!

On Veterans Day, local artist and songwriter Julie Kaylin released a new single, “Don’t Worry ‘Bout Me Mama”. The song – inspired by the bravery of our troops, the love between a mother and her son, the emotions family experiences when someone close to them goes to war – is aimed at supporting the troops and their families. All profits from downloads, “Don’t Worry ‘Bout Me Mama”, will be donated to Soldiers’ Angels.

“As the lyrics of ‘Don’t Worry ‘Bout Me Mama’ closely parallel the ‘May no soldier go unloved’ motto of Soldiers’ Angels,” Kaylin said. “I feel that donating to the Soldiers’ Angels is a great way for my music to help support the men and women who serve our country and honor their valor, as well as their family members’ courage.”

Check it out at JulieKaylin.com.

Mark your calendars because Joe’s Bar has yet another country-filled concert calendar starting in 2011.

On Jan. 7, Mercury recording artist Easton Corbin will kick it off a “little more country than that” with his rescheduled performance. Former Cross Canadian Ragweed frontman Cody Canada will debut his solo show on Jan. 14 with local super-group Jason & The Haymakers opening.

Milwaukee bred “Beer on the Table” Josh Thompson is set for Jan. 15 and Illinois’ favorite Texan, Pat Green will finish up the month on Jan. 29.

The love continues in February. Phil Vassar will hit the North side nightclub on Feb. 18. Head over to the CountryMusicChicago.com Concert Calendar for ticket info and times.

Just off the release of her third studio album, “Speak Now”, country music superstar Taylor Swift has announced the dates for her 2011 “Speak Now” World Tour. Chicago makes the cut with dates set for Aug. 9 and 10. Venue and ticket information to be announced.