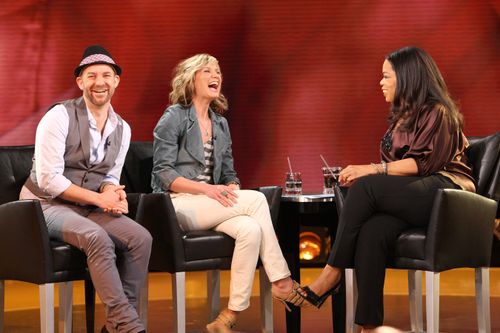 The much anticipated “Stars of Country Music” Oprah Show aired Tuesday. Mega stars, Kenny Chesney, Carrie Underwood, Darius Rucker and Sugarland all took the couch along side the queen of daytime TV Oprah Winfrey during the pre-recorded show from her Chicago studio. After performing his new single, “Down the Road”, Chesney answered questions about his life as a mega entertainer. He explained how he loved being on the road but it sometimes can be hectic. When asked by Winfrey, “Is there room for a woman in your life?” Chesney remarks, “Sure!”

Underwood shared her day-in-the-life with Oprah and how she keeps her super-star body and how she tries to carry on with normal life activities like grocery shopping and dating. Following Underwood was former Hootie and the Blowfish front-man, Darius Rucker who is making waves in country music with two chart topping hits form the album, Learn to Live. Rucker and Winfrey discussed his transition from Hootie to Country and how he wrote is current single, “It Won’t Be Like This For Long.” Winfrey asked, “Don’t you think country music is the real soul music?” “Country music is the real soul music, it’s the only place where you find the singer songwriter today,” said Rucker. “It’s soul.”

Closing the show was country music power duo Sugarland (Jennifer Nettles and Kristian Bush). When asked by Oprah, when did you feel like you made it, Nettles responded with excitement, “Right now feels like a good moment!” The duo then finished with their hit, “All I Want to Do.”

For more on the show, visit the show’s web site:  Oprah.com

Speaking of Sugarland, the duo had launched a re-designed web site,
sugarlandmusic.com Check it out!

Ravinia summer season tickets are now on sale to the general pubic through Ravinia.org. Due to popular demand, Carrie Underwood has announced a second night at the North Suburban venue. Check out ravinia.org for more.

As part of the Eight Shows at Joe’s promotion from US99, Martina McBride will play the North Side bar on May 6th. Tickets are only available through US99.

Josh Gracin, Darryl Worley and Cross Country Junction have teamed up with the Chicago Zoological Society to play a free show with paid admission at Brookfield Zoo on August 23 for Zoo Tunes.