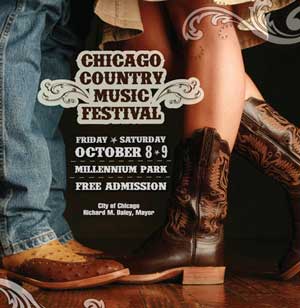 The annual Chicago Country Music Festival will return to Chicago’s lakefront – this year in Millennium Park – boasting a lineup as unique and diverse as the very city it’s named after. From the ’90 country staple Clint Black and Illinois’ own “redneck woman” Gretchen Wilson to newcomers Love & Theft and crossover artist Jewel, no matter what your country tastes may be, this free two-day festival offers a little something for everyone.

While Jake Owen‘s Saturday night appearance seems to be all-the-buzz this year, at this festival, it’s more than just the headliners. Over two stages, 19 local and up-and-coming artists will perform throughout the festival.  Hours of quality country music entertainment that can comply with anyone’s budget.

Returning in 2010 is the touring Country Music Association Songwriters’ Series. Featuring Kix Brooks, David Lee Murphy (Dust on the Bottle), new to the scene The Band Perry (Hip to my Heart) and hosted by the acclaimed Nashville songwriter Bob DiPiero. The series, which also will hold a paid night at Joe’s Bar, is an opportunity learn more about some of the best in the “behind the music” business and hear the stories surrounding those hit songs.

While cowboy hats are optional at this fest, don’t forget to grab the boots. Line dancing instructions will be offered at the Best Buy Honky Tonk tent.

Can’t wait for the festival? Get a jump-start at Joe’s Bar on Oct. 7 with Chicago-based country band, The Slim Pickens Band. The event is free but attendees must be 21 and older.

This one’s for the kids. It’s not often a country music concert comes equipped with children’s entertainment but from noon-6 p.m., the little ones can enjoy a jumping jack, facepainting, mural coloring and some interactive games in the Megamind Kids’ Corral.