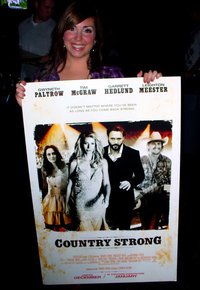 If you keep an eye on the Chicago country music scene, the name Katie Quick is probably no stranger to you. From her co-leading days with local band Yard Fulla Cars to her highly publicized departure to the music city almost a year ago, this Chicago native has truly moved her way to the top of our “artists-to-watch” list.

While Quick’s start in Nashville can be summed up as successful so far, her next big Music City break will hopefully come from a quick trip she back to Chicago last weekend.

On Saturday night, CMT was in town holding their “Country Strong” singing competition at Joe’s Bar. As part of a larger nationwide competition, the stage at the north side venue became the center of an American Idol style competition to find regional winners for their contest and, of course, to promote the upcoming release of the movie with same name. Yes, the one with Gwyneth Paltrow and Tim McGraw. Strategic marketing is I think what they call it.

While Quick is no stranger to this stage, she was up against some stiff competition. Her devotion to the craft showed through both her singing and in her stage presence during her performance and that proved her well as she picked up a 1st place win. Earning her $500 bucks and a chance to move on to the next round. While for most, the Saturday night event is now behind them, Quick has hit the ground running.

In the same way a politician might campaign for office, Quick has been hard at work. Today, She announce the launch of her brand new website, katiequick.com, and has started recruiting a little help from her friends through her Facebook page.  As starting tomorrow, Quick will compete in the national Country Strong competition on CMT.com and unlike the panel judged in first-round, the winner of the national competition will be declared by the number each contestant receive in online votes. The winner will have the chance to hobnob with some Nashville execs and hangout at the CMT Studios.

Here’s the catch, there’s no limit to how many times one can vote and the contest runs through Dec. 16. In the spirit of Chicago politics, let’s show Nashville who their next big star will be and head to the polls, or in this case countrystrong.cmt.com, to vote and vote often!