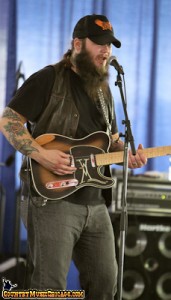 While country music’s next renaissance man may sound like he heralds from the honky tonks of yesteryear, Whitey Morgan found his hard-working blues in a recession-ruined factory town closer to Motown rather than crazy town. In fact, while his music may resemble the outlaw country that once put parts of Nashville on the map, Whitey Morgan and the 78’s appears to be keeping their distance from what was once the mecca for the working man’s blues. Morgan’s sophomore album, released as “Whitey Morgan and the 78’s”, was recorded in upstate New York and published by Chicago-based Bloodshot Records.

Morgan himself is a product of Flint, Mich, and through his music, and a few select covers, he uncovers the woes of modern day life in a town laden with empty factories and relents on the harsh reality of struggling just to get by. Practically picking up from right where outlaw country music left off.  Accompanied by a pedal steel predominant throughout the album, Morgan’s tunes of hard work, and even harder drinking, are strong enough to make the even the fathers of outlaw country proud.

With Nashville’s convoluted idea of what the make up country music in the 2010’s, it’s refreshing to hear an artist take a chance on a sound that has ultimately been pushed to the wayside, ironically, much like the industrial towns of the North. Unfortunately for Morgan, and ultimately country music fans, it’s unlikely will ever be able to break into today’s “mainstream” country radio.  So it’s up to albums and live performances to get your shot of this.

Are artists like Morgan a slight hope for the revitalization of honky tonk country? For now, we’ll just have to wait and see.

Whitey Morgan And The 78s