Am I the only one? - Country Music Chicago 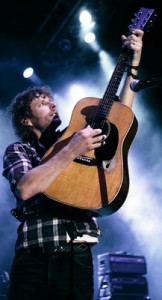 Like any country music entertainer, when an artist goes out on a limb and makes a slight deviation from the norm, with say a bluegrass album, country radio tends to ignore art for pop. So after a about a year off the mainstream spotlight, it doesn’t surprise me that Bentley might be asking, “am I the only one?”

Performing for a healthy crowd at the UIC Pavilion Saturday night, Bentley’s set list encompassed the entertainer’s near-decade long career. And what may have been a realization for Bentley after the release his latest single “Am I The Only One”, I assume it’s the debut from a forthcoming album, it’s best for him to stick with what he knows.

Back in 2003, when Bentley entered the mainstream music scene, it was his fast-paced, good-times country (What Was I Thinkin’ – Lot a Leavin’ Left to Do How Am I’m Doin’) – that quickly pushed him up the charts. Now looking back at that persona, and speed, is what truly put Bentley’s mark in the millennial country music era.

Almost like when Buck Owens’ Bakersfield sound challenged the “Nashville way” in the ‘60s – or Garth Brooks’ in the ‘90s – Bentley signature mix of bluegrass-inspired country has essentially, again, turned-up the country music tempo. Something that only Bentley has been able to accomplish better than the majority of his counterparts the male vocalist section of modern popular country.

Unfortunately for Bentley, this is something that he probably won’t be recognized for until they start making that glass case at that country music museum. Hopefully I’m wrong about this.

← Don’t be in a Country Jam!
It Started with Stay →

One Response to Am I the only one?