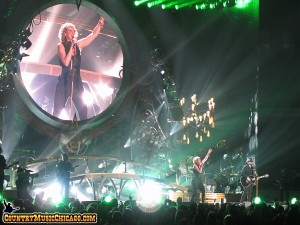 It’s not often I like to divulge my personal favorites but close friends of mine probably know that Sugarland has always been a top pick in my modern country category. I can still remember picking up their first album, in 2004, while I was attending college and a 2007 summer concert the duo played for Lou’s LaGrotto at the Cedar Point Sportsman Club in downstate LaSalle County. The duo was just off the release of their “Love on the Inside” album, and while at that point in time, they were well known in country music, they were just on the brink of mega-stardom.

At that concert, the duo’s last reigning radio single was the last release off their 2006 “Enjoy The Ride” album. “Stay”, that powerful single written by Jennifer Nettles had topped the Billboard country chart as one of the only top-tens without a drumbeat and would go on to pick up a two Grammys, a CMA, two ACMs and a CMT award for Nettles and the duo. Looking back, it’s clear, this single would become Nettles’ and Kristian Bush’s gateway into artistic freedom and a preview of the capabilities of the duo we know today. Since then, with more control over the writing and recording process, the duo release “Love on the Inside” in 2008 and, most recently, “The Incredible Machine” in 2010. Both albums have progressively reached new feats for the duo and for the genre.

While Sugarland has morphed, both publicly and musically, into a duo almost nothing like they were back in 2004, there’s something about their ability to instill some type of magical, musical spell on their followers. While like most country fans, I’ve been trying to wrap my brain around their “The Incredible Machine” album since its release last fall. With the exception of a song-or-two, this album truly defies anything you would consider “country music” and has left fans begging the question, do we trade in our country-cute songs like Baby Girl and just play along or do we wish them well and catch them on pop charts.

Never the less, with a complete sell-out crowd at the northwest suburban Allstate Arena on Friday night, it appears I’m not alone in the sugar-love category. The duo’s push into new, uncharted territories of the new country-pop movement appears to be welcomed by the community and, artistically, I hope the genre will grow along with them. It’s refreshing to witness a visually entertaining country concert with such a message, glam and stage presence. Something that, until recently, was quite stark in the country stand-by-your-microphone touring scene.

Let’s just not forget where we’ve come from.

← Am I the only one?
Katie Quick: “Valley Between Love” →