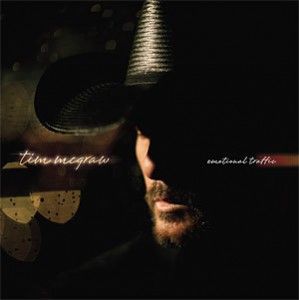 Tim McGraw’s last studio album released by Curb records, the company Tim has been with since his debut in 1993 was released Jan. 24, 2012. Released amid a very public breach of contract fight Tim had with Curb plus a title like Emotional Traffic, this release came with a great deal of anticipation. It did not deliver. The tag line with the release was a statement by McGraw that this was his best album ever. That may be true but it left this writer wanting more. There was nothing different about this CD.

There are some good songs on this CD. Halo is dramatic and powerful, you want to listen to this one. The One that Got Away is good; it has a message but still needs more originality. It has a nice melody but sounds like every other song with a message. Previously released Felt Good on my Lips was always a pleasant song and nice to listen to, it still is.

This is not a bad CD, it is worth listening to. The main feel from this CD is that more is possible. More of a country feel,more originality, more of a unique sound, something to identify with McGraw and McGraw only. Too many of the songs on this CD sound the same. They are dangerously close to having a pop feel to them. We need something that sets McGraw apart from other country and pop singers. Perhaps he could tap into his roots growing up with a famous father or write about his battle with alcoholism, something that gives some heart, soul and a country feel to his music. As it stands now, this CD is ok, it’s nice to listen to but it’s not very different and not all that special.