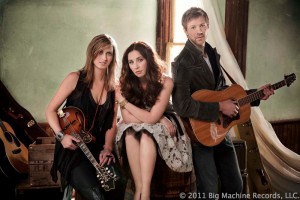 Edens Edge is bringing their unique sound to Joe’s Bar this Friday, February 17th! With one listen to the talented trio, it’s obvious they have created a sound shaped by their individual influences. Following the success of their recent single “Amen” these three young musicians from Arkansas — Hannah Blaylock, Dean Berner, and Cherrill Green — are making their debut on Big Machine Records with a vibrant sound that honors country music’s roots while creatively pushing the envelope. They have recently toured with Brad Paisley and Lady Antebellum, and are gearing up for their summer tour with Rascal Flatts.

Taking the stage before Edens Edge is Big Machine artist, Thomas Rhett. Thomas is the son of country singer Rhett Atkins and was introduced to music at a young age, but didn’t start playing country music until his senior year of high school. In 2010, he signed a publishing deal and soon after landed his first cut on Jason Aldean’s platinum album, My Kinda Party, with his song “I Ain’t Ready To Quit.” A year later he signed a record deal and has recently spent time opening for artists such as Blake Shelton and Pat Green while working on his debut album.

The music starts when Thomas Rhett takes the stage at 9:00PM, followed by Edens Edge at 10:15PM.

Tickets are available on ticketweb.com or at Joe’s box office.