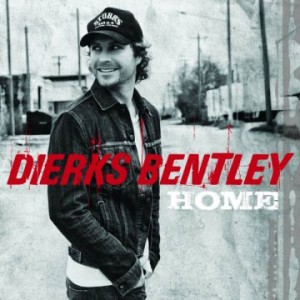 Dierks Bentley introduced himself to us with What Was I Thinkin’ which became so much of an anthem that women still wear little white tank tops to his concerts. He then revealed his love of Bluegrass music with Up on the Ridge an album that received critical acclaim across several genres of music. That album allowed us to hear the bluegrass and roots of country music that led to his wanting to become a country singer.

Now there is Home his sixth studio album and while the title song is a patriotic tribute to America, the rest of the album goes in a different direction. It is a consummate country album with a well crafted mixture of love songs, rowdy drinking songs, longing and missing you songs as well as loving, leaving, and love of America songs.

The album has two bonus tracks both written by him which were not included in the orginal play list. It was a stroke of genius to add both songs. Cold Cans is destined to be come an anthem to country music. Who doesn’t identify with “Gotta have some cold beer with my country music.” ? As the little white tank top always makes one think of Bentley, cold beer with country music will too.

He is a very real performer. Usually dressed in torn jeans and a t-shirt his songs are very honest and true to life. Although, in my mind, he isn’t just a country performer but rather one of us. And we’re just like him.

This album has fun and rowdy songs like the tongue in cheek Diamonds make Babies, Am I the Only One, Gonna Die Young and 5-1-5-0. It also has songs about heartbreak, love and longing such as Breathe You In, In My Head, and Heart of a Lonely Girl. Thinking of You is another song that speaks of longing but at the end he has his daughter Evie sing with him which was unplanned and makes this song even more heart wrenching and beautiful. The song Home is a patriotic ode to America and being American. Along with that is the song Line#7 which addresses the troubled auto industry in Detroit.The proceeds from that song are being donated to Big Brothers/Big Sisters of Detroit.

With this new album aptly titled Home, Bentley shows us many facets of himself and essentially brings us right back Home, exactly where we want to be, listening to him.

Watch Home the the music video: