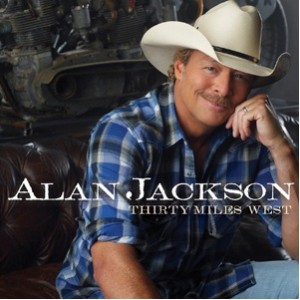 Alan Jackson’s 17th studio album and first with his new label ACR/EMI records Nashville is pure, 100% country, no pop, no rock and roll, no big band sound, no frills, just country the way country should sound. To those of us who long to hear pure country without all the extras, Jackson’s new album Thirty Miles West is a perfect example of what we like.

Jackson has been critical of current country music sounding too pop-like and not “traditional” enough. And he shows us – rather excellently and gracefully I might add – just what he meant. In this album, Jackson has a little bit of everything including those slow, sweet ballads he is so famous for (When I Saw you Leaving), fast toe tappin’ fun songs (Dixie Highway), songs about life and songs about love and love gone wrong (Gonna Come Back as a Country Song, Look Her in the Eye and Lie, You Go Your way (“ and I”ll go crazy”), drinking songs (Life Keeps Bringing Me Down, Long Way to Go) and more.

He wrote six of these 13 songs and all of them are pure country the way it was meant to be. This album has a lot of guitar picking, banjo picking, fiddle, Jackson’s melodic wonderful voice, a minimal band background sound and a feel to it that transports the listener to the rocking chair on the back porch, chewing a cattail as the wind blows the corn stalks contemplating life. Thirty Miles West was worth the wait and so very welcome. This is not only one of Jackson’s best albums, its’ also one of the best country CDs in a while and makes us want to hear more…. from that “Dixie Highway…no sweeter place you’ll ever find”