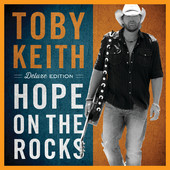 This is Keith’s 16th studio album, he wrote or co-wrote all ten songs, and they are all country. [and all Toby] There’s something so familiar about his barritone, his southern drawl, his songs about drinking, women and love lost, his advice on life songs, his bluesy ballads. And yet no matter how many CDs this Oklahoma man releases, no matter how many songs he writes or sings we never ever get tired of listening. There is something so comforting about his southern drawl, his home spun advice, his beer, his women. Yes we’ve been here before, Yes we will be again and Yes we want more.

In an interview with US99, Keith said that Hope on the Rocks is his favorite song that he has ever written. That title track is classic Toby. He puts himself in the role of a bartender and paints pictures of people like he did with Clancy’s Tavern. He covers topics that hit all of us such as divorce, foreclosure,suicide. We can look past the sadness of the words to see the big picture of what he is saying. Do you ever wonder? You know you do, we all do. That is what strikes us, even though Keith paints pictures of people,he is talking about all of us at one time or another and we see/hear ourselves in his portraits. They strike such a familiar chord we are incapable of pulling away and not listening. So we listen and we keep listening.

Other songs on this CD follow suit such as Scat Cat, The Size I Wear, the previously released I like Girls that Drink Beer. And Cold Beer Country. All these songs have the same qualities;they are fast, toe tap worthy and talk about us, all of us at some point and these songs are so engaging we cannot stop listening and we want more. Always want more. That is what Toby does to us.

Get Got has some down home country spun advice from an older cowboy to a younger one, another of Keith’s classic themes. Haven’t had a Drink All Day could become an anthem much like Red Solo Cup. He also has some sad slow love lost songs, like any good cowboy would. Haven’t Seen the Last of you with background vocals by Mica Roberts again touches us in places we don’t always want to admit we were touched but Toby will do that. Missed you Just Right is reminiscent of Garth Brooks song Unanswered Prayers but with a more bluesy,more country feel. He ends the CD with You Ain’t Alone which in this writers’ opinion is the best song on the CD.He describes life after his love left him and who in the world cannot relate to that, who cannot feel those images of cold coffee on the stove, ashtrays full of cigarettes, a nightgown on the dresser? You cannot help but identify with the song’s words and with the feelings they evoke. Again classic Toby. Listening to Toby is like settling on the couch in the arms of an old, dear friend. The feelings and thoughts are there, no matter how much time has passed or how someone has changed or even if they have changed, the affection is still there. The love is here to stay and nothing life shows us will take that away. Toby Keith is a truly amazing singer, songwriter and that is why after 20 years we keep going to his concerts and buying his CDs. He fits, he’s comfortable and we are in love.