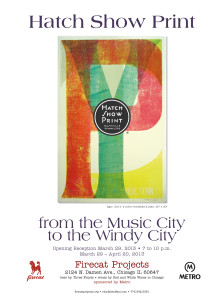 If you have ever managed to make it down to Nashville, specifically to the Country Music Hall and Fame Museum, you probably couldn’t help but notice a layer of vintage show posters covering the walls on the third-floor exhibit space.

These posters are not only historical in the sense of the musical, vaudeville, circus and minstrel shows they once promoted across the country but the iconic vintage style they represent has very much become synonymous with Nashville and its historical music city past.

Although the modernization of printing and design have long surpassed the printing press method, there’s one surviving member of this bygone era that still today produces advertising posters and artwork.  Located on Broadway, in downtown Nashville, the Hatch Show Print letterpress shop still turns nearly six hundred jobs in any given year – according to their website – but often it’s their earlier work that now passes for pop culture art.  (Have some Hatch Show Print hanging in my room…)

Making its way to Chicago, like any great Nashville performer would do, the Hatch Show Print will make it’s Windy City premiere at a local art gallery, Firecat Projects, located in Bucktown.

Opening Reception well be held on Friday, March 29 from 7PM – 10PM with the exhibit running through April 20, 2013.  More information at firecatprojects.com