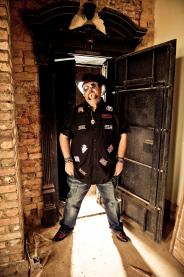 Country rocker Colt Ford is planning to play over 200 shows in 2012, including this Friday night at Joe’s Bar. And while many of his fellow rockers are known to get a little rowdy after the show, Ford says he usually has other…more important things to do…such as TWEET.

“Oh yeah, I don’t do it as much as Blake Shelton or anything, but I like to get on there and respond to my fans,” says the larger than life Ford. “A while back, someone was saying something derogatory about one of our shows and I responded back to him, and before I knew it I had 200 people yelling at the poor guy. My fans have always been loyal like that…but ‘ya know….you can’t make everyone happy.”

Claiming Chicago as one of his favorite places to play, Ford is eager to spread the word on the May 1st release date for his new album ‘Declaration of Independence’, along with an upcoming headlining tour that will pair him with acts such as JB and the Moonshine Band, The Lacs, & Rehab. And while he can’t promise that any of the new tracks will find their way onto Friday night’s set list, he does say that the new album will give his fans exactly what they have been asking for.

“I would say this is the best record I have ever made,” says Ford. “I basically decided to go back to what I did on the first record when I didn’t know any better. This record is all about being honest and open and giving my fans what they want out of Colt Ford.”

And after another packed weekend of hard rocking show, Ford says he plans to spend his Sunday night watching the GRAMMYS. “The GRAMMYs are just so special, and I can’t wait to see what happens with ‘Dirt Road Anthem’,” he says. “Country music is getting so much attention these days and that’s a great thing. We need the Lady Antebellums and the Taylor Swifts and The Band Perrys of the world just as much as we need the Jamey Johnsons and George Straits and Colt Fords.”

When Scott DuBose takes the stage at the first annual Rockin’ on the River Ribfest, concert-goers will be treated to what this local artist calls, “Ranch Rock.” On Saturday, opening for country music star Chris Cagle, DuBose will open the Miller Lite Main Stage starting at 7 p.m. While DuBose firmly believes the best thing… END_OF_DOCUMENT_TOKEN_TO_BE_REPLACED