Country Thunder USA is a Illinois and Wisconsin Stateline favorite. Located on a rural farm in Twin Lakes, Wisc, this 4-day festival features hours of high-quality country at the Shadow Hill Ranch. 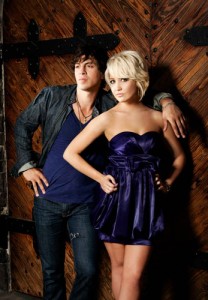 It’s been awhile since Joshua Scott Jones and Meghan Lindsey graced our television screens to compete in the CMT series, Can You Duet?. While here in Chicago, we’ve had a few opportunities to catch the duo, better known as Steel Magnolia, in the Windy City, a lot has happened personally for the two since they last played on Illinois soil.

For one half of the duo, this Illinois soil is not all too foreign for the now Nashville-based duo. While chatting with the two during their recent stop at Country Thunder USA, I had to ask Jones about his little known Illinois roots.  A native of Charleston, Illinois, Jones explained his fondness for Chicago as he spent many nights in the area while gigging at the northwest suburban Durty Nellie’s nightclub.  He remarked, not in a country band but growing up in downstate Illinois, country music is a natural thing for him.  It’s obvious that Jones is multifaceted when it comes performing to music, especially since he hooked up with one very talented Louisiana girl, Meghan Lindsey.

We talked about their recent release of the duo’s debut, self-titled album and how  it finally made its public appearance earlier this year.  They filled me in on their strict touring schedule which puts the two on the road a lot. You may recall the two paid Illinois a visit when they stopped at the Pontiac Crystal Palace back in February.

My chat with the two wasn’t all about the past, in fact it wasn’t too long after the duo publicly announced their big news about a future gig – and we’re not talking about a concert.  In June, the duo announced they’re planning a 2012 wedding to finalize their long-term engagement.  Lindsey remarked that while they’re excited to finally tie the knot, they’re really busy touring around the country and hope to get all together soon.

Well Meghan and Josh, congratulations, but you’re going to have to put those wedding plans aside for at least one more night.  On Saturday, the two will return to headline Joe’s Bar. Joined by the The McClymonts and Tyler Farr as openers.  Doors open at 7PM and tickets are $10 available through ticketweb.com or at the Joe’s Box office.

Steel Magnolia with Tyler Farr and The McClymonts (21+)

Getting ready for Country Thunder 2011, we thought it would be fun to reminisce a bit looking through last year’s photo collection.  If you recall, we faced similar stormy and extreme heat weather conditions but all-in-all, the show went on without a hitch.  Superstars Miranda Lambert, Sugarland, Kenny Chesney and a host of other big-named… END_OF_DOCUMENT_TOKEN_TO_BE_REPLACED

Festival Alert: Country Thunder rumbles in the near future with a mega lineup and major fun. When it comes to summer country music festivals, there’s no competition for Country Thunder. A stellar four-day lineup of some of the biggest names in modern country music combined with all of the qualities of the great outdoors, it’s a… END_OF_DOCUMENT_TOKEN_TO_BE_REPLACED

For the months of June, July, August and September of 2011. With a little help from the mainstay country music touring acts, the summer 2011 country music concert season in Chicago is really starting to take shape.  As in years past, major acts such as Tim McGraw, Brad Paisley, Lady Antebellum and Kenny Chesney fill… END_OF_DOCUMENT_TOKEN_TO_BE_REPLACED

Mark your calendars! The summer Wisconsin country music festival season is quickly encroaching upon us. To ensure the most bang-for-your-buck, purchase your tickets and camping packages soon to take advantage of the early-bird discounts. Here’s a summery of what’s headed to our favorite backyard playground state.     2011 Wisconsin Country Music Festivals with major… END_OF_DOCUMENT_TOKEN_TO_BE_REPLACED

Traffic Jam… The afternoon commute in Chicago just got a little worse. Metro’s PM traffic reporter, Marti Jones, has signed off at WUSN, US99 radio. The intent of her abrupt departure from the Drew Walker show is unclear but her afternoon presence on the Chicago country radio station will be missed. After dedicating the show’s… END_OF_DOCUMENT_TOKEN_TO_BE_REPLACED

Reminisce from Country Thunder, All the dirt on the Red Dirt Fest, a concert for the trees, watch Dierks in the Den and get unwrapped with Trailer Choir, Sugarland and Trace Adkins. The calm after the storm With a lineup featuring major touring acts like Kenny Chesney, Miranda Lambert and Sugarland, it was easy to… END_OF_DOCUMENT_TOKEN_TO_BE_REPLACED